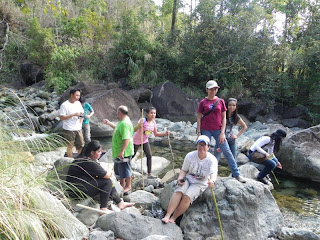 I am neck deep with work for the past 3 weeks. Deadlines were and still are almost a few days apart which has been depriving me of much-needed sleep, rest and recreation. But somehow last weekend I got to surface from it all and joined some members of the PNPCSI and the 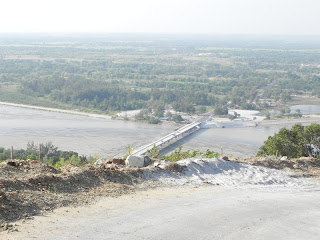 Taxonomy class of UP Manila in their trip to botanize a certain locality in Zambales. The destination was in the adjacent towns of Botolan and Iba. The goal was to help some students collect herbarium specimens for their Botany class. The proponents were mostly pre-med students trying to hurdle their last few requirements. 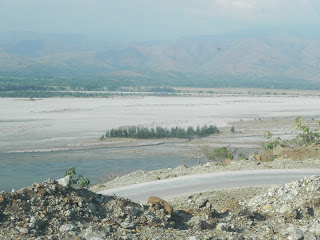 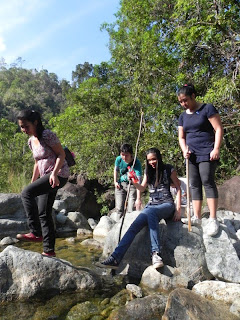 Ronald Achacoso was very generous to volunteer his family's property to house the students and their teachers. At the same serve as main collection area for botanical specimens. The Achacoso house was located near an estuarine river thus is a natural depository of flora and fauna suited for mangrove and coastal conditions. It was here that the U.P. students completed their requirements of 20 species (per student). It took them a whole afternoon to scrutinize and scavenge the areas for cuttings and collections to be pressed as herbarium specimens. Of course while the 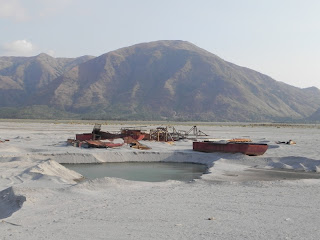 others are busy doing their main business in Zambales, we the PNPCSI members on the other hand tried to explore the adjacent landscape for anything that would tickle our fancy. Most often enough, the sight of interesting plants (and to photograph them) would be enough excitement for us. But in this case, the contrasting appearance from grassy foothills, lahar stricken water beds, tree covered slopes and rocky riversides became our eye candy. Indeed the Zambales landscape is still worthy to explore, despite the obvious signs of exploitation. The seemingly bare mountains (from a distance) have a few more natural wonders still tucked under their sleeves. 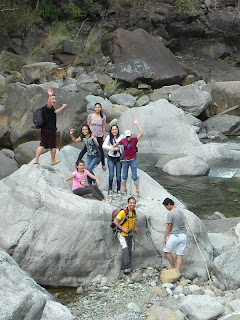 After a day and a half of exploration, the students pressed and packed their botanic specimens. They made their way home with a few more exciting stories to tell about their Zambales adventure. They vowed to comeback with a more leisurely pace. Just hope the Zambales mountains would be still there awaiting their return. With the rate 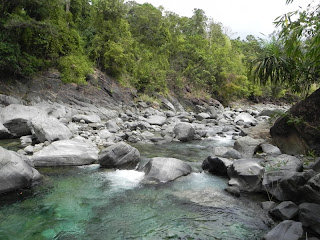 of destruction we saw in our short stint, there won't be any wild Zambales to go back to in a few more decades. Let us cross our fingers it won't reach this extreme so we would have more Sambal adventures in the future.
Posted by metscaper at 12:26 AM No comments:

And They Said You Can't Landscape with Philippine Native Plants...

Yes it has always been possible but not easily realizable. For one, most of the plants we have known in our gardens for as far as we could remember are mostly exotics. Even the plants mentioned in our folk song 'Bahay Kubo' growing in the periphery of the vernacular house are all non-natives. The Spaniards dictated and drove the Indios to plant these common vegetables, all familiar edible fare for the colonizers. And even upto now, colonial mentality is very evident in Philippine gardening as most ornamental plants you find in local gardens are exotic plants. But hopefully that would not be for long. 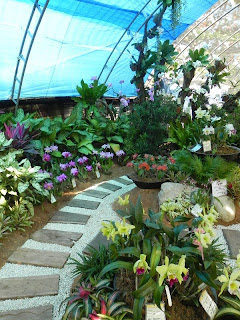 This year's Philippine Horticultural Society's Annual Garden Show showcased our lesser known Philippine plant natives in their garden and plant exhibits. Most landscape participants used a significant number of Philippine species in coming up with their innovative and well designed landscape displays. The Philippine Native Plant Conservation Society was privileged to be given a booth to landscape, but among the participants it had the extra goal of using pure native species in its design. I was given the task to do the design and Susan Topacio and her Jardin Isabel team was so generous to execute the booth for the society. With the help of Jun Golamco and the very vigilant PNPCSI members Anthony Arbias, Ronald Achacoso, George Yao, Joey Diaz with Ernie Alvaran, it became possible to exhibit a 100 percent Philippine plant display for the PNPCSI horti booth. 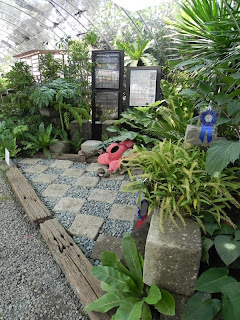 The design used hard and geometric accessories to emphasize and contrast the lushness of Philippine green. It was also stressed by the society board to use very little, if not none at all, critically endangered species to promote responsible conservation. So what found their way into the booth were landscape staples like 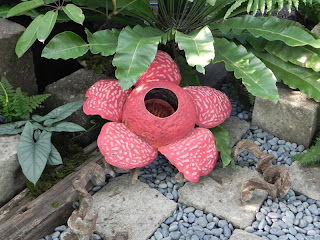 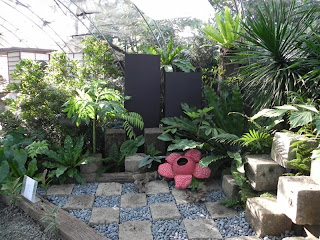 If I were to be asked, I would call the PNPCSI booth 'At the Edge of the Rainforest'. Honestly since the once impenetrable rainforest is now becoming less and less in area, the forest perimeter, on the other hand, is increasing. Light is slowly being let into the once dark shade of tall canopy trees. So along with the disappearance of the big trees, some plants used to the shady growth are also lost. But others who were stunted by the lack of sunlight are now becoming evident and common. Thus more light loving plants like pioneer trees, brushes and grasses are replacing our rainforests. 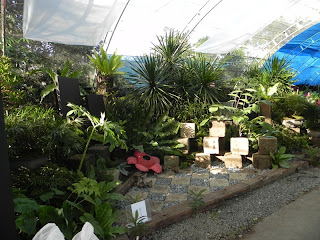 So before the Philippine plant species completely vanish, let us hope they find their way into mainstream landscaping and planning. But it should be done properly, by cultivating the said specimens from propagation materials and not collect them straight out of the wild. We hope we in the PNPCSI have put out that proper message in our participation in the horti show. May we see many more beautiful native species, in variety and number, in our Philippine gardens.
To the Philippine Horticultural Society and everyone who helped in staging the PNPCSI display, our very warm gratitude!
Posted by metscaper at 3:48 AM 5 comments: 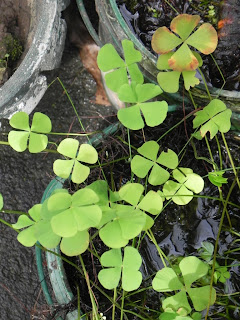 Luck, anyone? It is probably what most people are wishing for this new year. If I was Irish, I would go look for clovers or shamrock, if the specimen is genetically mutated that is. The plant has long been associated with immense luck in that part of the world. Clover or Oxalis sp. are naturally three-leaved. To find a rare one having four leaves is said to be lucky and would give good luck to anyone who finds one. When I was very young I have tried looking for hours for a four-leafed clover in a garden in Tagaytay. It ended in vain. So believe me it is indeed very hard to find this very lucky clover.

But people in the Philippine countryside would need not to look very hard to find a four-leaved plant looking like the four-leaved clover. Marsilea crenata or the four leaved clover fern is a native species, found growing in wet soil along rice paddies, shallow streams and ditches. Most who would skim through a patch would not have difficulty locating one with four leaves, as he would find almost every one of them having four. If only the Irish people knew how lucky we are Filipinos to have this plant in our backyards. But most Pinoys do not even know what Marsilea crenata is. We look for more tangible personal luck rather than our luck of having unique natural resources right on our doorsteps.
Posted by metscaper at 10:59 PM 1 comment:

Why Some Plants are Safer to Remain Unknown

There is a drawback in promoting Philippine native plants for mainstream landscape use. We Filipinos do not know how to responsibly harness these wonders growing in our forests. In our need to earn a quick buck, we forget that sometimes we take too much advantage of the environment. In terms of plants, when poachers learn that there is a demand for a particular plant find in the ornamental trade, the poor species is over-collected, mindless of the species' extinction in its natural habitat. 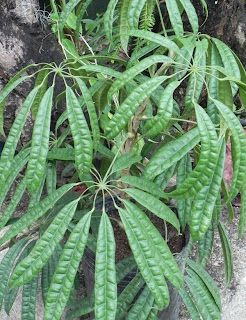 This morning I had the privilege of seeing one of the most beautiful Schefflera, and was astounded to learn it is a Philippine species. A little research, I found out that it is not only a Philippine native but endemic. From what I know is that a few specimens are already found in cultivation and from what I have heard, it is very much possible to propagate. A Eureka moment (quoted from Ronald Achacoso) is that in a few minutes of typing in my computer, I learned the exact botanic name of this species, but also attached is the distribution range. Now it is a dilemma if I would even mention the exact botanic name so as not to divulge where to get it, ultimately to protect the existence of this plant. Sometimes it is advantageous for a plant to remain undescribed or unknown to the public so just to protect it from over collection in the wild. But then again some of these plants may just as well vanish from the forest because of destruction of its habitat. I will at least post one picture of the plant for posterity, for record that there is such a plant coming from our forests. May it become common in both landscape and in its native range, but hopefully the wild specimens of this species may remain in its proper place - under the canopy of the bigger trees of the rainforest.
Posted by metscaper at 10:18 PM 2 comments: