The Lumbangs are in Flower! 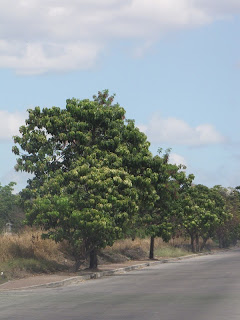 Quick Post! If you live in Fairview and has wondered what those silver leaved trees along Regalado and Mindanao 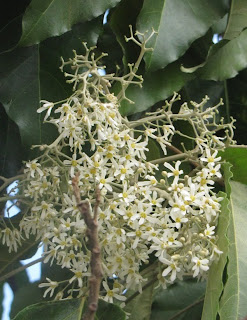 avenues are, the answer is lumbang or Aleurites moluccana. The leaves are more silver right now because they are 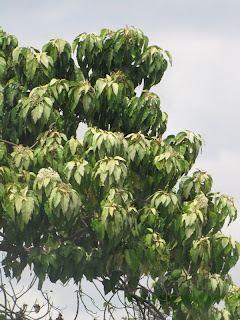 complimented by its white tiny flowers.
Posted by metscaper at 11:42 PM 2 comments:

And I Finally Came Across Ligas! 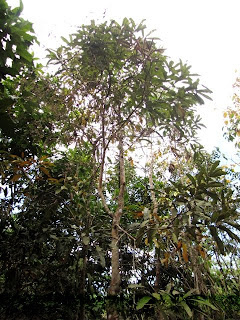 Have you ever heard what Cruz na Ligas in U.P. was named after? I always thought the ligas meant ligaw, or lost in English. So I thought the place was named after a lost cross...or something like that. Apparently ligas is a name of a very handsome but slightly dangerous tree, Semecarpus cuneiformis. 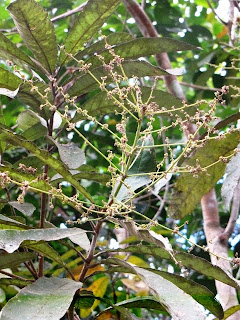 When I started looking for trees in UP Diliman, one of the first I asked Mr. Emiliano Sotalbo was the location of this arborescent species, which the Cruz na Ligas name suggests should be present in the campus. But the only specimen Mr. Sotalbo knew was located in the Arboretum, and when we reached the place where it should have been, the ligas was nowhere to be found. He suspects that the tree was fallen, either by forces of nature or in human hands. So ligas has eluded me eversince.Yesterday I stumbled upon a specimen in Novaliches, at the La Mesa watershed. Leonard Co pointed it out to us among the brush. 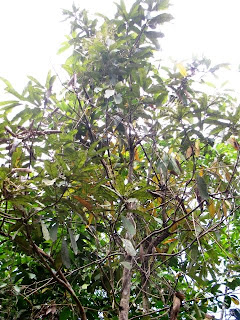 Ligas is quite a small tree but somehow similar in appearance to kasoy (Anacardium occidentale, which is not native). The fruit is said to be edible, but some parts of the tree could be quite a pill to handle. I have not yet confirmed if it is the sap that is an irritant, which could inflict quite an uncomfortable rash to its victims. But then again it is a member of the cashew family and related to the mango (which both are known to inflict slightly burning chemicals, the cashew has a potent poison which if not prepared or cooked properly could burn your mouth).

An Update on the Red Flowered Trees 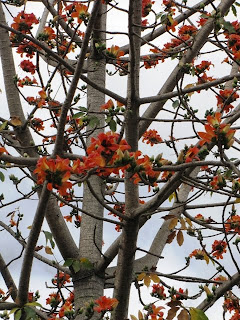 I was saddened last year to learn that the Bombax ceiba or malabulak in Sikatuna Village was cut down. I was thinking that my best candidate of a flowering specimen is gone. 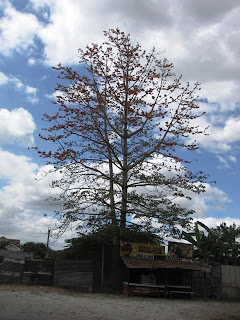 Yesterday I went with the Philippine Native Plant Conservation Society to nearby Novaliches and passed a lot of flowered specimen of the tree. Even La Mesa watershed has flowering specimens. Hope the red blooms would last the Nova residents enough good memory for them not to cut the trees down. Here is hoping!!!
Posted by metscaper at 10:54 PM 2 comments:

That Small Tree with those very Big Leaves 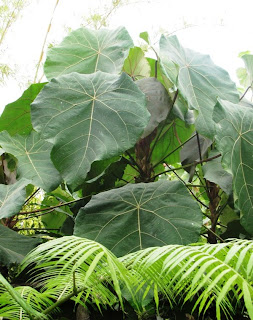 I am about to get burned up writing my thesis (which I have been doing for the past 2 months). So this afternoon when Ronald asked if I would want to come visit Mr. George Mendoza's garden I grabbed the opportunity to take that much needed break, much more when I learned Uly Ferreras was joining us (I had a few questions to ask Uly about some plants in my thesis). 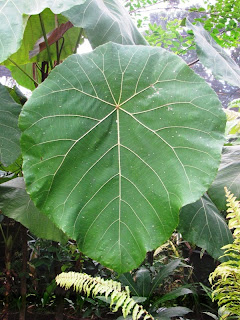 When we arrived in Sir George's garden, immediately again I was in thesis mode (so much for the needed break) to see the fabulous specimens of Macaranga grandifolia near the gate. My pictures of takip-asin (some indigenous people use the very large leaf as food cover) were few so I immediately brought my camera out and started snapping at them. 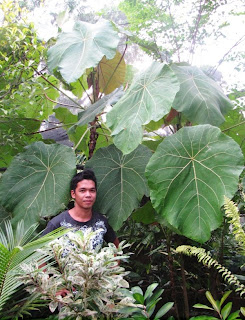 Macaranga grandifolia is a small tree reaching a height of 7 meters. It is an endemic species according to Uly, only seen in Luzon and Mindoro. Yet Sir George mentioned that this plant has long been cultivated in places like Hawaii. In the Philippines only a few know the aesthetic value of this unique arborescent species.
A little anecdote - I have been complaining to both Ronald and Uly about writing my thesis and how I have been running out of choices to replace of all words - tree. They suggested arborescent species. Not even sure if I used it or spelled it right.
Posted by metscaper at 10:11 PM 10 comments: