I was blessed with an opportunity to see neighboring Indonesia on a shoestring budget. As usual I did not forego of the chance to learn what the Indonesian landscape would look like especially that it is very close to home yet one of its islands, Bali, is very well known for the lush tropical and at the same time very cultural-inspired gardens. But since it is still a foreign land, despite the proximity, the language barrier was the first to hurdle, towards learning more about Indonesian culture.

One thing we noticed about Bahasa language is the similarity of certain words to Filipino vocabulary. A little layman history, both our country and Indonesia have been included in the trade routes of prehistoric Chinese merchants. In some cases some words were slightly modified because the Chinese could not properly utter the sound of the letter 'R', frequently replacing it with 'L'. The following are a few words I encountered which underwent such phonetic transformation.

Scanning thru the resto menus we learned that wine in Indonesia is arak very closely resembling the Filipino word alak. In Indonesia there are a lot of wines ranging from sugar cane, palm juice and rice, hints of our very own tuba and basi. My friends Irene. Pinky and Cathy took taste samplings of the Indonesian wines (courtesy of Pradha Restaurant Bar). They ended up ordering glassfuls.

The Indonesian word for flavor is rasa, close to our own word lasa. The cup noodles and other food products would carry labels like rasa ayam or chicken flavor (ayam is chicken, goreng is fried, hence ayam goreng is fried chicken).

At the Ubud and Denpasar intersections I frequently encounter the phrase potong rambut so I asked our driver, Wayan, what it meant. he said it means cut hair (barber) with rambut being the translation for hair. It is why rambutan was named such because it is a hairy fruit. Rambutan is also called the same locally in the Philippines.

The Indonesian word for tiger is harimau. Tiger used to be abundant in Indonesia but now they are limited to a few individuals in the biggest island Sumatra. They were feared as monsters. Probably why it translated to halimaw in the Philippines, our vernacular for monsters.

More Indonesian 101 when I finally recall the other words I learned.
Posted by metscaper at 8:10 PM 2 comments: 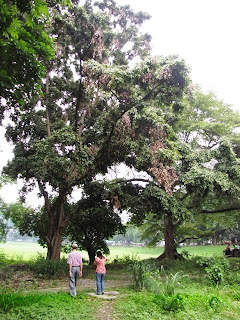 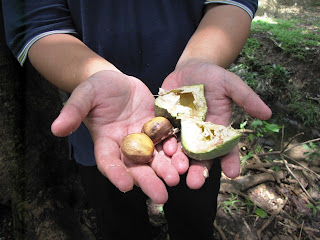 Quickpost: I forgot to post this last month. Cel Tungol and I had lunch with the treeman of MSI (U.P. Marine Science Institute), Prof. Ed Gomez. He is the frontrunner in native plant advocacy in the university and the metro. As we made our way to ROC in Bahay ng Alumni, we passed by the main library area 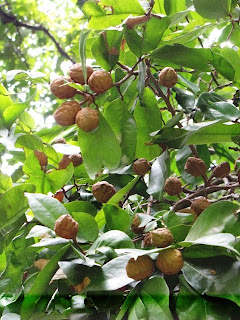 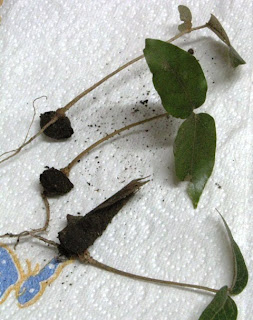 dungon (Heritiera sylvatica). In true hardcore tree advocate fashion, both Cel and the professor dirtied their hands in picking up the ripe seeds and sprouting seedlings, to be planted as propagation material. A few more tree hopefuls saved from the blades of the U.P. grass cutters.
Posted by metscaper at 12:17 AM 5 comments:

Distinguishing the Abaca from Banana 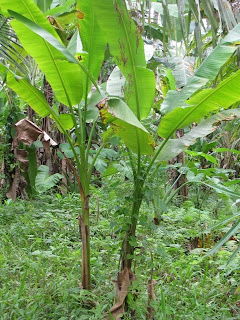 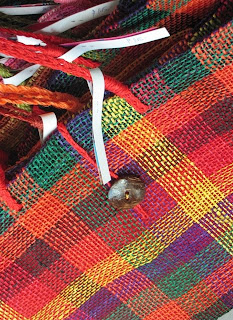 When I was in Sorsogon, one of my goals was to see an actual abaca tree, the source for Manila hemp or abaca fiber. For what I know, abaca is Musa textilis, a relative of the common banana. (Musa spp. commonly Musa x domestica) So I was expecting that it would look like a typical banana tree, which 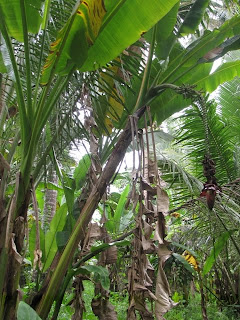 makes it harder to identify. Indeed it was.

At first glance at the Bicol countryside, I could not readily distinguish the abaca from the 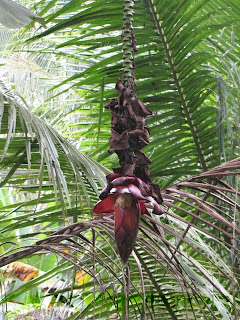 different banana varieties. Since both are sourced with produce, both are also grown in plantations. It took the trained eye of a local to tell the two apart. Abaca I was told has a narrow built than banana trees. The leaves have a slight narrow and pointed tip. The flowers and eventually the fruits are non-remarkable. 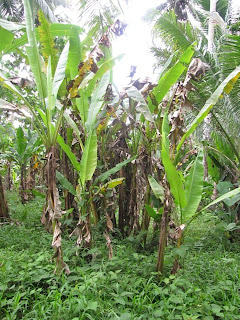 I still could not readily tell apart abaca from banana. But suddenly specimens became more evident, ironically dispersed with banana trees in plantations, and in outcrops anbd brushes in mountain slopes. 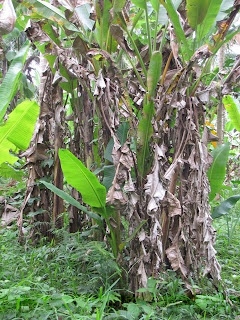 I almost forgot. There was another reason why there are less abaca trees visible in Sorsogon. The tree has a disease spreading called 'bunchy top'. This makes abaca leaf crown deform and easily wilt. Trees are literally cut down to the base and burned to prevent the spread of 'bunchy top'.
Posted by metscaper at 10:17 PM 5 comments:

A New Breed of Animals from a Different Forest 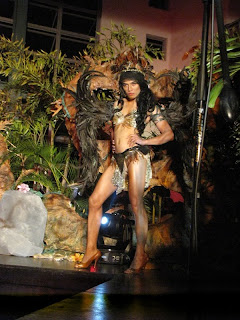 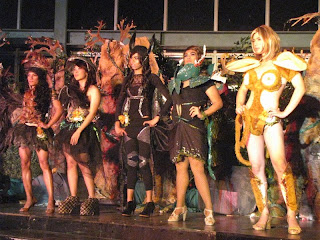 For a change I am posting something non-plant related in this blog. My friend Ibay wanted to reminisce her Engineering days and wanted to watch the Hiyas ng Arki festivities. This is a different beauty pageant where they get to cross 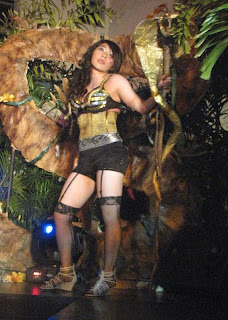 dress real guys (non-gay) for fun and pit them against each other like in any other beauty contest, plus a lot of fun of course. The contestants are male representatives from the different UP 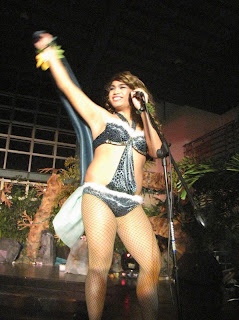 College of Architecture student organizations. They will get to be judged as woman for a night, in swimwear, costume, talent and Q&A portions.

What intrigued me was that they took the jungle theme this year and the contestants got to dress up as different animals. From what I could remember and decipher, they were garbed as the following: bat, snake, crocodile, 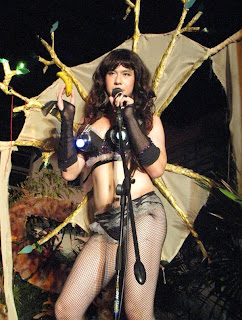 monkey and eagle. Disregarding the fact that these are all for 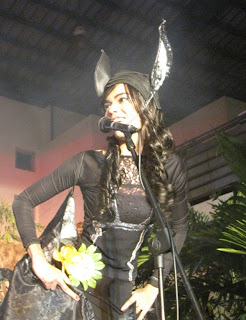 laughs, the costumes and the role-playing really reflected the character of their assumed avatar animals. They mirrored the funnyside of each animal's traits, with a little green humor to capture the rowdy crowd's attention and ultimately the judges preferences.

Oh and yes, I was told that the bat won (we left early after Ibay got hungry and had had enough of her Engineering nostalgia). One of the few instances the lesser animals would get to be noticed for their achievements.
Posted by metscaper at 7:19 PM No comments: 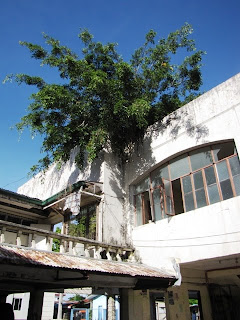 The genus Ficus, commonly called figs, is well represented in the Philippine forests. They are food source for birds and other fauna. That is why a lot of figs get to grow in the strangest places. A bird may eat the fig and de 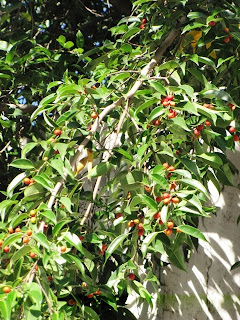 posit the seeds very far away from the mother tree. Most of the time they are discarded in the oddest spots, like the branches of trees or cracks in old buildings. 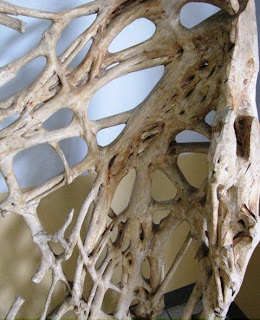 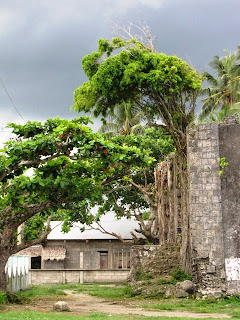 The most common name given to strangler figs in the Philippines is balete. Balete is a coined word for a number of species like Ficus concinna (dalakit), Ficus philippinensis, Ficus benjamina (salisi) and much more. Baletes are common even urban areas. Nowadays they could be found being used in landscape because of their ease in maintenance. 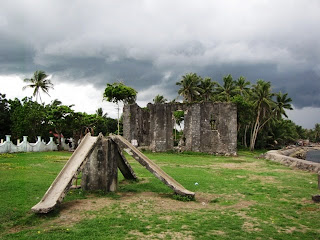 But wild crafted specimens also abound in the most unlikely places like roof eaves of old structures. These are commonly the puzzler plants, making spectators wonder how the tree was planted on such a high place not easily reached by people. The answer is nature.
Posted by metscaper at 10:31 PM 12 comments: 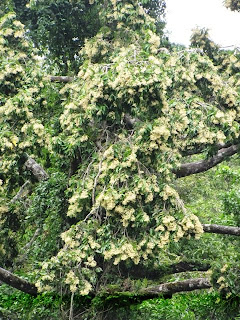 Dipterocarps are for me the most legendary trees in the forest. They are the winners in the survival game, outlasting and shadowing the other 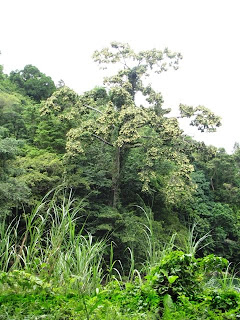 trees. We often hear the names tangile, yakal, gisok, lauan, bagtikan, all good wood sources and members of the family Dipterocarpaceae. But a majority of us Pinoys might probably die without even knowing what a dipterocarp tree looks like. Even here in my blog and in my thesis, I could only count a handful of dipterocarp accounts. It is probably because it is previously thought that these trees are hard to imagine outside of the rainforest context (but recently trees are being examined for their viability to use as urban trees, will blog about it in the future). 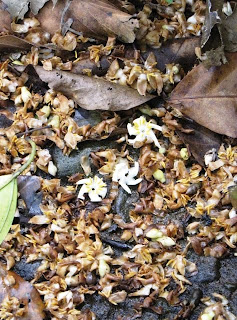 For a city boy like me, it is already a spectacle to see a full grown dipterocarp, much more one in full bloom. And I was lucky to spot the red lauans (as identified by our guide, Noel) in bloom in Mt. Bulusan, Sorsogon. 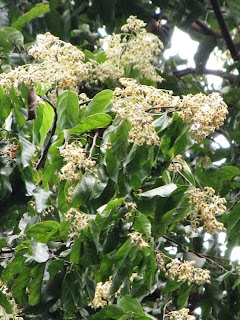 Red lauan is supposedly Shorea negrosensis, ranging from Cagayan to Sorsogon and some islands in the Visayas. It is Philippine endemic. It sure is refreshing to see that a giant red lauan flowers profusely, with proximic specimens blooming simultaneously. I could just imagine the expected seed bounty in the next months. Here is to continuously hoping!
Posted by metscaper at 10:39 PM 10 comments: