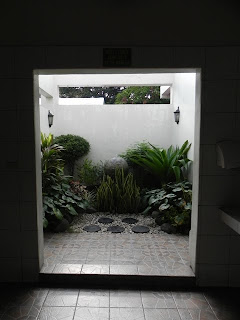 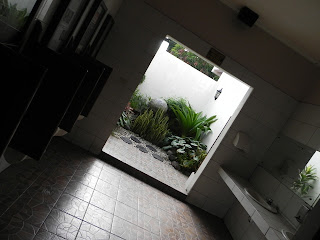 Quick post: When I saw this garden this morning I was delighted. It is not because I like its design very much but rather because this secrative garden was where I least expected it to be. It is not in any quaint residential house or any high profile commercial establishment. It is at a community gas station in the very rural San Miguel, Bulacan. The most surprising was that it is located inside the public restroom - in that provincial gas station. It just shows that you find the most interesting things in the least likely places. 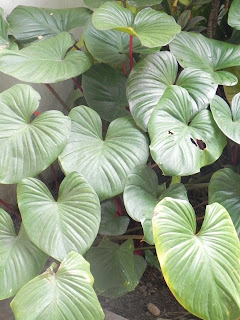 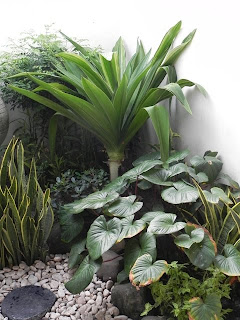 Incidentally I tried to scrutinize if this garden had ornamental native plants. It did at least have 2, Murraya paniculata (kamuning) and Homalomena rubescens, an aroid.
Posted by metscaper at 10:53 PM 1 comment:

Zorro in U.P. and Beyond 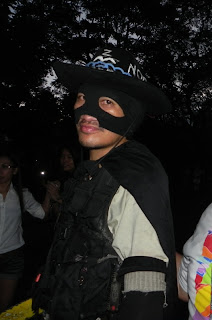 I am not even sure if U.P. could claim 'Zorro' as its own, but as far as I could remember, I first saw him in U.P. premises. I was not even yet enrolled in my masteral classes, I could recall him patrolling the very busy intersection of Krus na Ligas on C.P. Garcia. I thought he was just another one of those urban wanderers, but slightly geared-up, garbed-up like the cape crusader 'Batman'. In fact that was what I called him, not knowing what his official nickname was. That was maybe circa 2003 or 2004. 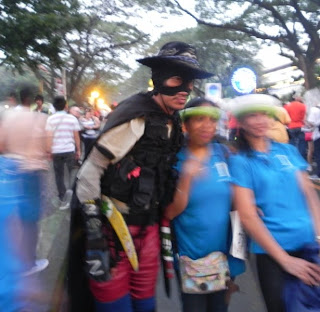 Six to seven years later, he has earned the monicker 'Zorro'. He has become a U.P. icon, the U.P. Zorro. He is a staple on the University oval. He usually sits around late afternoon in front of Vargas Museum, to the delight of most (and detriment to some) joggers on the oval's bike lane. As far as I know he is harmless, inflicting only some critical comments to some unfortunate by-passers. The most I heard from friends, they are blunt statements like 'Ay maganda tong isa, pero tong isa, mataba' (Zorro describing 2 female joggers - one petite and the other a little on the plump side). But most who do get some reactions from him would just simply shrug it off, passing it off as a quick laugh. 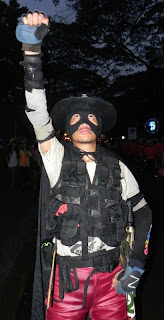 But lately I have discovered Zorro's new daily itinerary, staying at the pedestrian triangle at the entry of Elliptical Road coming from Quezon Avenue. At around 1 pm, Zorro would stand proud at that intersection, with his hands akimbo. He is usually with his 2 trusted companions (an old Tonka dump truck toy and his boomerang). So it seems he is widening his patrol range. He is now becoming a fixture beyond the Diliman campus. 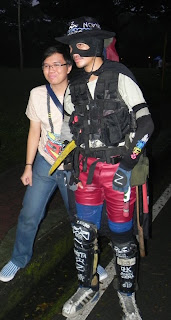 I do not know his story and history. Like in the original Zorro, we do not know the real person behind the mask. I heard rumors that he was once a U.P. student who could not handle the pressures of his studies but I was told this is unlikely. There are more but these too were just as lost in obscurity as the first claim. But whatever his origin is, U.P.'s Zorro is already a legend. He has become part of U.P.'s popular culture, an identifiable fragment of any average student's life in this era.
Posted by metscaper at 11:52 PM 2 comments:

A Quick Change in Color 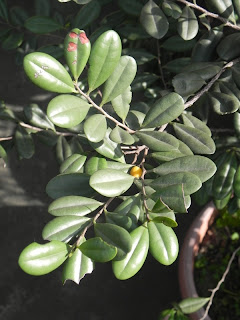 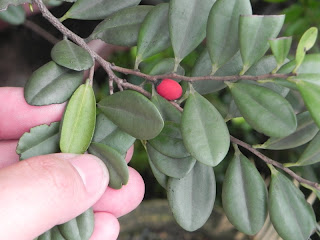 Quick post: The bantulinao fruit turned red from yellow, a few days after I first took pictures of it. But our current cook Edison, who also is a Samar native, said that the fruit of my potted bantulinao is much smaller than the marble sized fruits he could remember growing by the beach in his hometown. I will see if the underdeveloped fruit will yield any viable seed.
Posted by metscaper at 11:16 PM No comments:

A Final Salute to Familiar Trees in my Farmville Farm 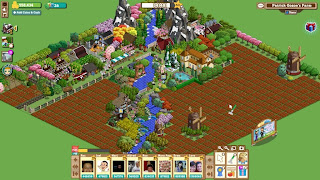 Finally! I have kicked off the habit of playing Farmville. It has been a full month since I became farm sober. Honestly I could admit that at the thick of it, I was playing planting and harvesting for two hours in a day. It really became an addiction, taking much of my time from doing the more urgent things, like blogging, hehehe. But what is important is that I did manage to stop doing it...further. But I would say I did get to build an awesome kick-ass farm (yoo-hoo for self praise!). 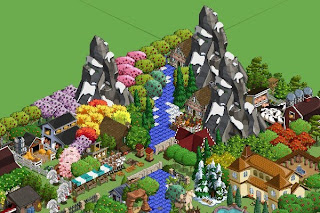 But as a last indulgement and salute to my Farmville habit, I would blog about some of the familiar trees I have enjoyed harvesting for the last year in my cyber farm. Since it is virtual, some of these Farmville fruit trees could not even co-exist with each other in real life. (imagine palms growing at the foot of snow cap mountains). In the natural world, some of these simulated species would not even get to grow in a same land parcel with the others because of the different growth requirements. Most of the original trees offered to be virtually farmed were temperate and subtropical tree species, but some tropical exotics did get into the Farmville mix. Sadly none of them are true Philippine natives. So we have to really give our own Philippine produce trees a boost in the farming popularity race. 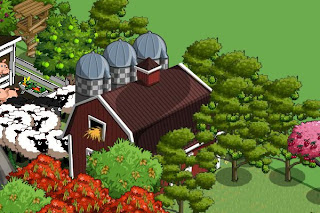 The layered cartoonized trees at the top of the picture are supposed to be durian trees. Durian is Durio zibethanus, which is commonly grown in Mindanao and is an argued native of the Philippines. From what i heard is that biologists claim to have seen really ancient trees of durian growing in the Mindanao and Palawan forests. 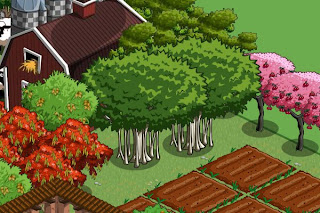 This tree with a lot of stilted roots is called a banyan tree. Banyan is Ficus benghalensis from India but is closely related to a lot of strangler figs or members of the genus Ficus in the Philippines, including balete (Ficus philippinensis), salisi (Ficus benjamina) and dalakit (Ficus concinna). They bring out aerial roots which eventually become secondary trunks. 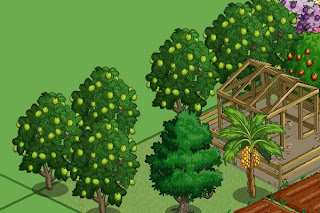 The lobed-leaved trees are bread trees (Artocarpus altilis) of 'Mutiny on the Bounty' fame. They are related to your common jackfruit or langka (Artocarpus heterophyllus) and the native antipolo (Artocarpus blancoi). The bread fruit now grows a plenty in the provinces and mixed with some local ingredients in Filipino cuisine. It is called kamansi, dalungyan or rimas in Luzon.

There are a few more familiar trees ttat could be cultivated in Farmville. But the bigger part are trees usually common in international fruit trade, thus more popular produce in bigger developed countries ( like apples, pears, avocados, apricots etc.) - trees which most Filipinos could not grow in their own backyards. But they sure make one heck of a virtual orchard, a fruiting dream plantation. I will certainly miss my Farmville farm. But I love having more time doing more productive stuff. I am better off saying goodbye to virtual farming. Sayonara, Farmville!
Posted by metscaper at 12:52 AM No comments: 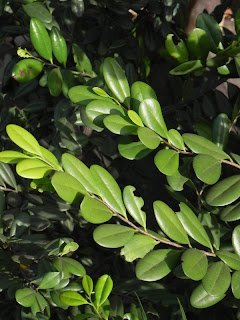 I got my very first bantulinao from one of our old cooks, Nana Juaning. She would see me tending to the garden and would always utter 'ay wala kang bantulinao!' (you do not have bantulinao). I remember asking what bantulinao was but she always kept on describing it vaguely to me. 'Ay, ang ganda ganda nun!' she always added. I tried googling it then (in 2003) but there was always no result. Her accounts decribed bantulinao as a native species in 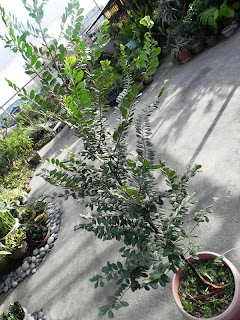 her hometown in Samar. She said grows in the outcrops of limestone along the coastline.

Two years after, Nana Juaning was not anymore working for my family, I got a call from her niece who just got back to Manila from Samar. She said Nana Juaning sent me 3 seedlings of her fabled bantulinao. It took a good friend to fetch it from the niece's house in Paranaque and another 3 months for the bantulinao to finally 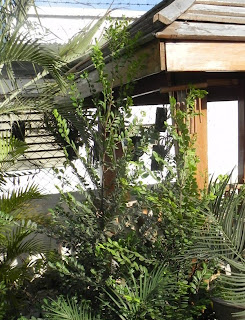 reach me (as the friend also stays in Paranaque and we rarely see each other). But when the plant finally arrived in the house, indeed I was immediately enamoured by the bantulinao. It is a bushy plant with very attractive dark glossy leaves. The stems are also deep colored, almost black. Since I already had specimens, it was easy to research what the plant in question was. It turned out that bantulinao is a Diospyros species related to the kamagong or mabolo. That is why it had almost black stems, reminiscent of the dark ebony wood common in Diospyros. Bantulinao is argued as being either Diospyros ferrea or Diospyros littorea. But it is probably littorea which connotes it is common along the shore. 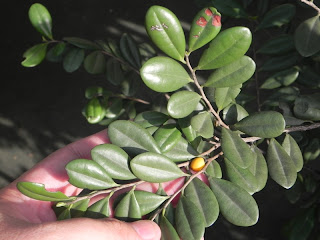 Now, five years later, Nana Juaning's small seedlings are about my height, growing potted in my garden. Occasionally it brought out very tiny tulip like flowers. But this year, the bantulinao gave us a special treat by fruiting (which did not develop fully). Which proves that the bantulinao is capable of fruiting in cultivation. Our old cook's legacy has truly become one of my treasured collections in my garden.
Posted by metscaper at 10:13 PM 1 comment:

Another Year to Blog on Trees

It is 2011. It will be the 4th year for me to blog on trees, starting from my multiply site in 2007. Probably blogged close to 200 entries, writing about numerous plants along the way. Philippine trees alone are 3500 species. There is still a long way to go and I am hoping I would get the chance to explore more of the botanical wonders of our forests. May I have more opportunities to blog on our Philippine trees.

Cheers to our native green this coming year!
Posted by metscaper at 12:08 AM 7 comments:

The Leafy Patch of Pond Lettuce 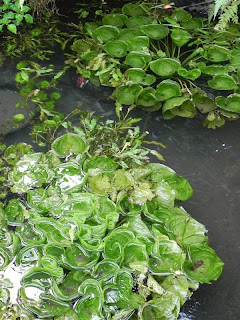 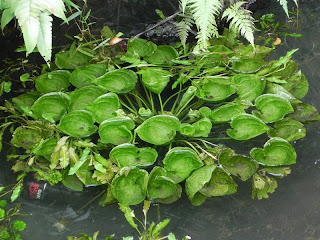 When I was still keeping aquarium fishes and plants, I have already encountered the native pond lettuce, or Ottelia alismoides. It is one of a few entirely aquatic plants, which would be hard to establish emersed out of water. I was then considered one of the more experienced aquascapers but I have had problems keeping Ottelia in my own planted aquarium, even if most literature would say it is a fairly easy plant to cultivate. 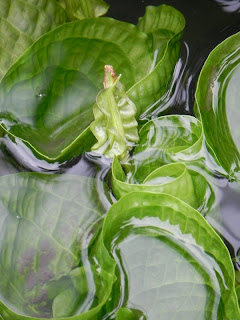 Two years after I have dismantled my last aquarium I again found myself admiring the pond lettuce, this time at a public pond in NAPWC. The particular plants I saw were far from the lanky-leafed and translucent-bladed pathetic specimens I kept in my old 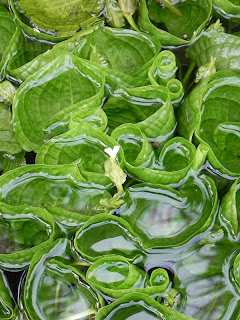 aquariums. The two patches had numerous robust and crisp leaves. They were curled up like cups, arranged in an attractive rosette. White flowers and seed capsules were also present, signifying that the plants were indeed very much healthy. The healthy patch is big, which would prove too Ottelia to big to keep even in the biggest house aquarium. It would be better kept in a spacious pond which would allow a lot of surface viewing.
Posted by metscaper at 12:01 AM 2 comments: