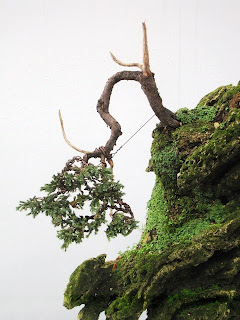 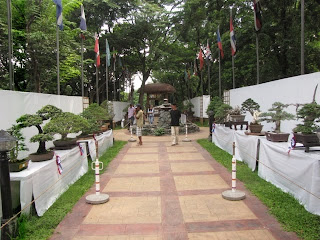 A few weeks ago I attended and lectured in a new local bonsai group's annual show. I could not recall the name of the new group but the show was helmed by no less than Mr. Mody Manlicmot who maintains the bonsai center in UP. Like previous plant shows it had an exhibit portion where they showcased some of the best and well kept dwarfed trees. Based on the exhibited plants, the Philippine-ized Japanese tradition is still alive and well-kicking in the local scene, with the kick ass living bonsai art pieces. 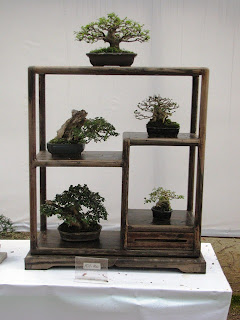 My friend Ronald Achacoso once told me that bonsai may not be for the Filipino culture. Though we have the artistic prowess and talent, we collectively did not have the discipline and patience required for bonsai art. The 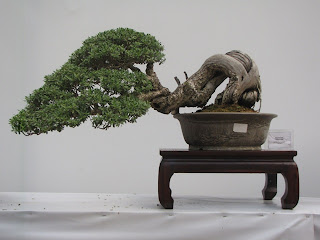 constant pruning and shaping are taxing for most Pinoy hobbyists, though some may have the knack in spotting, shaping and maintaining these precious trees. 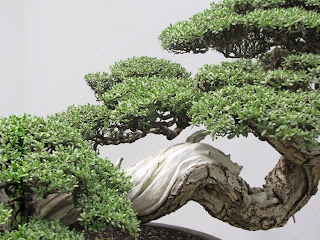 Bonsai keeping in the Philippines is still primarily a business rather than art form. Most people ending up owning the painstaking bonsai specimen may end up having them mishapen or worse, die under their care. One case is the local tree species bantigue or Pemphis acidula, which is a coastal species. Specimens would require regular saltwater application. Bantigue bonsais in the garden often are neglected of this need and left to luck to survive. 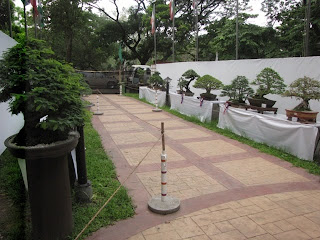 The exhibit had more bonsai-d native species than just favorite bantigue. Each tree was very much artfully crafted. I could say that the artists and owners of these exhibited bonsais looked like they are properly providing the utmost care and maintenance needed for these trees to aesthetically live on.
Posted by metscaper at 10:22 PM

Hi good day ! very interesting article you have and it was impressive. Thank you for sharing this i've learned a lot and i think this will help me and other garden lover .As for now im into garden accessories such as wind chimes , crystal twisters and wind spinners .They were perfect and very impressive . Some of my guest were much delight and amaze on this , the color and designs are very perfectly contrast with my garden and its theme . Im happy that i visited your site and i hope that i can read more articles from you . Thanks a lot .

This is an interesting and informative site.

May be good to post on the "hows" of caring trees, their aesthetics, especially those in pots. I know you are not a bonsai enthusiast, but your interest in plants may help bonsai amateurs to have an eye on the science and art of plants and nature. Your other post suggests that you also have a good handle on the artistic side of plants, which is very much imbedded in bonsai making.

I am planning to put up a site on bonsai making, based on years of experience developing some. My old site disappeared when the host stop its circulation. Until now, I have been receiving queries all over the world on the "how to" and "where to start" kind of stuff. I don't want to give them the illusion that they can grow bonsai in an instant.