Quick post: I was minding my own business when I chanced upon a flock of red munias feasting on the pile of rice husks. They are very noisy hence you can't miss them.  But when I gave them my undivided attention (hehehe pointing my camera in their direction) they hurriedly flew into the nearest Glochidion tree.  I pretended to not look at them and one by one they went back into the rice hull pile.  Tried to sneak some stolen shots of them while feeding on whatever they could still find hidden in the pile.  They are very cautious. could only frame a few of them.

It is good to see the munias are still very common in this part of he Philippines. Hope the poachers won't catch them.

Posted by metscaper at 4:50 PM No comments:

Last Saturday, at a little past 7 pm, an Amarela staff ringed me over the phone.  He said Atty Nunag was letting us know that there was an unusually large red colored moon out that night.  They were wondering if we would want to see it.

Of course I wanted to see it so I went out of the room clutching my trusted camera.  On my way out I saw other guests hurrying out into the beach to experience the red moon by the water. Lazy me chose to view it from the Amarela restaurant balcony. It was almost empty with people.  Probably everyone was at the beach looking at the moon near the water.
But when I was choosing a good position, Chi was in one corner and had already brought out her I-pad taking a picture.  I teased Chi on how she was becoming a techie. I positioned my camera on the balcony railing and started snapping pictures of the lunar phenomenon. A little while more the other guests appeared back in the dining hall and the moon slowly lost its red hue. Fleeting moment!

Posted by metscaper at 10:49 PM No comments:

I am back in Bohol with Arch Chi Victorino. We are checking out the plants in Amarela's new Bohol inspired house, but it is Saturday so the workers went home early. Had the chance to visit the adjacent Libaong beach which was in low tide. People are also out enjoying the ephemeral wide sandy beach.  Though there are more crowds out than usual, it still pales in comparison to the number of people partying in the congested beaches of Boracay. Hope it stays that way.

Posted by metscaper at 7:53 PM No comments:

Fruit Star of the 2013 Pahiyas

Quick Post: This fruit was everywhere in this year's Pahiyas.  There was abundance of it and caught everyone's attention because of the bright red color.  At first you would think it is rambutan but upon closer scrutiny you will realize that where the rambutan's hair should be, in place of it are more rigid spines. Plus the taste is not exactly as sweet but more on the sour side. First time tasters get the shock of their life!

The Lucban residents have a local name for it which sorry I forgot (as they say, senior moment). The fruit is probably kapulasan or a native relative of rambutan (probably Nephelium ramboutan-ake).

I am becoming a Pahiyas regular. It was in 2008 when I first attended the Lucban feast.  The second time was in 2010.  Third was last year making me present every other year.  But I am again back in Pahiyas mode this year, accompanying some friends who are first timers.  We attempted to make it a day trip riding a Lucena bound bus from EDSA at 7 am.  It took more than 5 hours for us to reach Lucena.  We ate lunch in Catalino restaurant between Lucena and Tayabas, before taking the bus-like jeep going to Lucban.  It was already 230 when we entered the very busy streets of the festive town.
As usual, decorations were all out, cladding the house facades with kiping, pandan, banig, bamboo, fruits, leaves, husks and even recycled items. The streets are literally overflowing with color and awed crowds, not missing the chance to take memento pictures and souvenirs. My companions and I joined in, scrutinizing all the detail and ingenius crafts employed. Cameras were flashing and snapping everywhere.  The elaborate ones had constant mobs in front of them, but we squeezed our way through them, to make our experience complete and authentic.  It included us sampling some of the offered delicacies, like kakanins and the famous longganisa.

One of the things we tried tasting was this Pahiyas's ubiquitous fruit.  I suspect it is kapulasan or the native rambutan-like fruit, but the Lucban residents called it by another name which at the moment escapes my memory (something like lugang?).  The fruit adds a very bright crimson color to the displays.  My friend nibbled on the tender but succulent flesh and could not help squirm because of its very sour taste.   I wonder if the locals harvested the fruits for eating or just for pure aesthetics. We saw more than 20 house using fruit bunches as their primary decoration material, probably because the wild trees are in fruiting season.

But aside from the red fruit, the expected usuals are again back in full force, like anahao, buri, bungang ipot, hagimit, kaong, balete, karagumoi, takipan.  Indeed this side of the Banahaw slopes are blessed with natural bounty.  Two hours later, we left Lucban with bayong bags filled with pasalubong. The bus ride home was spent reviewing the jpeg images stored in our cameras and of course the memories of first time seeing Pahiyas.  As for me, I added another year of experiencing the unique Quezon festival.  I look forward to being back again in the next one, may it be next year or the succeeding ones after that.

Last Minute at the Sunday Market


I was contemplating if I will go to the Centris Sunday Market last weekend.  For one I texted Ponchit Enrile at 9:30 am (needed to give him complimentary copies of Metro Home Magazine) if he was there, but he appears to be not looking at his phone.  I also messaged plant friend Ernie Alvaran if he wanted to go but also no reply. At past 11 am, I decided to brave the Sunday noon heat and take my chances. Thanks to the empty Sunday Q.C. streets, I reached Centris in a jiffy.

At Centris, it was not hard to find Ponchit.  He was there at his usual place in the Rarefruit stall, exchanging stories with other bubbly members of the society. I handed to him the magazines and while the people inside flipped through the pages, Ernie appeared in front of the Rarefruit stall. Minutes after, even Centris regular Ressie Navarro popped up. At the last hour of the Sunday Market, the usual plant suspects were all present, trying to catch a last glimpse of the flora merchandise before stalls close.

One unusual specimen I saw was a large Hoya cumingiana, grown in a 14 inch terra cotta pot, with sprays almost 2 meters in length.  The branching (rather than the usual vining growth) Hoya usually are seen attached to limestone cliffs.  It is still quite common in the wild, and has long been cultivated in gardens. So far I have only encountered small plants especially the garden grown ones, the biggest with sprays reaching about only a meter long. 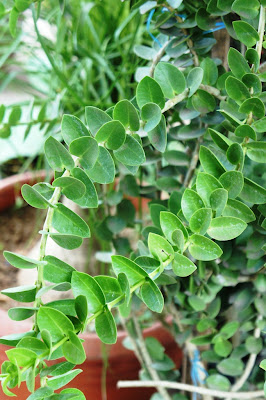 The large specimen was sold on the last hour before the stalls were dismantled.  I barely got the chance to take pictures before the new owner whisked it away.  Between doing my chores and seeing the Hoya, my last minute Centris visit became well worth the trip. But capping the weekend market day with a vegetable pasta lunch was an added bonus!

Posted by metscaper at 12:36 AM No comments:

A Whole Lot of Hoyas

It is Philippine Labor Day - a local holiday therefore ideal to meet up with a few friends since the Metro Manila streets are not congested with cars and people. It  is probably the reason why on this day a few plant hobbyists led by Ed Agdeppa tried to revive interest for plants from the genus Hoya by convening in far away Fairview to share infos and swap Hoya cuttings.  They chose La Mesa Eco Park as venue for the exchange.
Attendance comprised a small group, but it included people coming from as far as Bicol.  Mac Pagsolingan who came from San Fabian in Pangasinan brought along a small truck of his Hoya propagations to sell, Chatuchak style.  The enthusiasts started to grab their species of interest, but mostly foreign ones like Hoya kerrii, deykei, verticillata, and much more.
I myself, who for years have forgotten my first love (Hoya), could not resist getting a few pots.  Hopefully they could reestablish themselves again in my garden. Even Ed Agdeppa, who I gifted with Hoya halconensis in 2009 (and has grown and propagated it very successfully in his garden), has regifted me with a specimen to return back under the shelter of my deck's trellis.


The meeting was capped with a short talk from Mac, who gave tips on how he propagated his hoyas with high percentage of success. He uses floral foam for the small cuttings, which he also dips in rooting hormone. Bigger specimens are grown in coco coir and husks.

The participants all went home with smiles, especially the ones who won very nice pots of different Hoya plants courtesy of Mac and some other attendees.  There was a whole lot of Hoya joy to share!