It is U. P. Flowering Season! 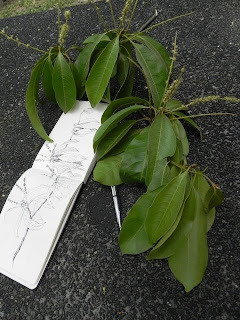 A few weeks ago I went around UP again with Cel Tungol. Cel was of course on bird watching mode hoping to find and glimpse on the more elusive bird species, including a pair of peregrine falcons frequenting a communications tower on campus. I, on the other hand, was hoping to find time to sketch a few plants around the oval ,which I did. It helped me get motivated to do the drawings as a lot of the plants were in flower. I got to pen in 2 plants in my itsy bitsy plant notebook. 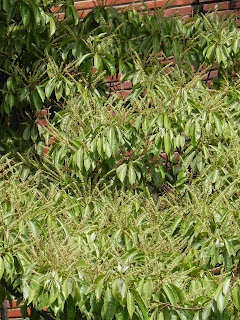 The first I found to draw was Terminalia microcarpa or the familiar sounding kalumpit. 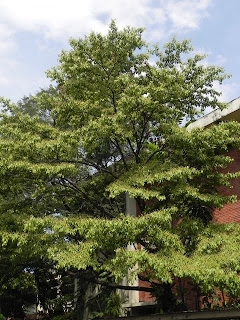 This is very much related to the talisay (T. catappa), hence the flower of kalumpit appear to be smaller version of the talisay's. The tree located behind the Biology pavilion at the back of Palma Hall was profusely in bloom as seen in the accompanying picture. I was once told that the 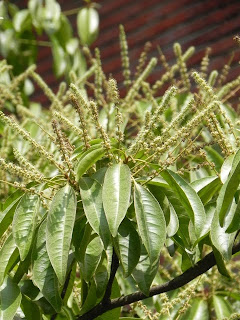 kalumpit flowers have a slight stink in it, similar to cat feces. I could attest that this is partly true, but it is not as bad as it sounds, much more tamed than a kalumpang's. 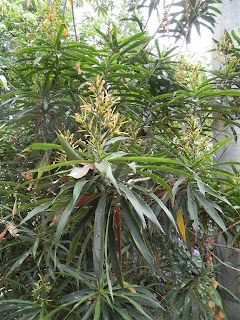 Plant no. 2 is Dracaena angustifolia or malasambal which was also in bloom that week with erect yellow inflorescence spikes. This on the other had I believe is very fragrant (but not sure if only at night). I once smelled the flowers of this in a private garden and I could recall it having a very pleasing smell. Though the plants behind Palma hall had flowers, they were in the late stages before falling off. Thus I did not get to smell them in their prime and glory moment. 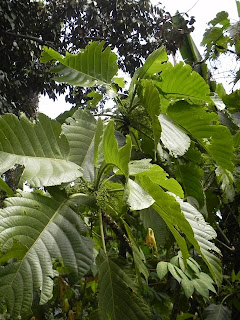 A plant we also saw but dared not to get close to, even if it was too tempting to sketch, was a suspected lipang kalabaw or Dendrocnide sp. To 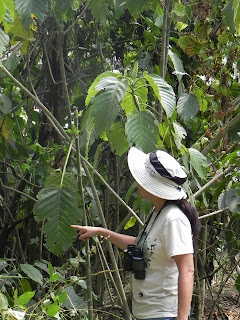 shoot this one, Cel and I had to go through the back alleys and open lots of the student dormitories. It is actually a surprise for us to even find a big plant within campus, not sure if it is old, either remnant of original QC flora or introduced by Biology students or teachers. The specimen we found was very big, growing and flowering out of a very deep ditch.

The last find of the day was a flowering iba 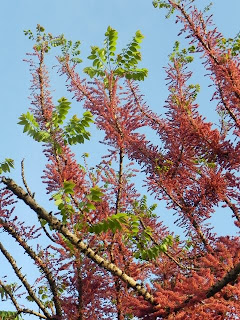 or karmay, Phyllanthus acidus. The plant is very similar to kamias but its fruit is more rounded. The flowers are quite small and 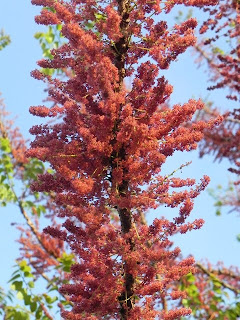 could only be appreciated in close up. But the trees we found were in very profuse blooming stage, thus the branches are almost covered with the inflorescence. I am not sure if karmay is native. I asked Ray Ong about it and he said it is a native of tropical Asia including the Philippines. 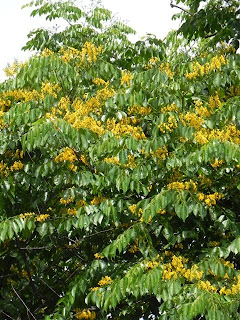 To cap off our day, we waited for the peregrine falcons to perch on their reported favorite spot. But the falcons had different things in their minds as they were no-shows, to Cel's disappointment. She just had to content herself with the other birds she saw and the flowering trees which did not disappoint us at all.

P.S. Oh and yeah, the narras were in flower too!
Posted by metscaper at 10:14 PM

Hi Patrick, so that is D. angustifolia! I haven't smelled its flowers, what i really referred to you which has an overpowering smell is D. fragrans, which you said is not endemic. I thought it is ours. We have lots of lipa in our property in Batangas and i'm also afraid to go near it. That iba plant i have not seen yet.